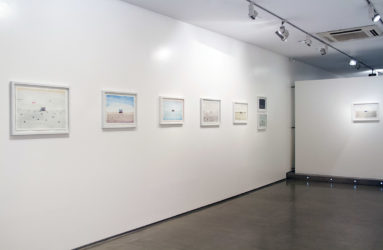 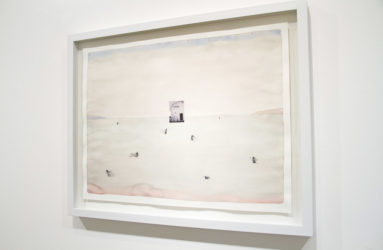 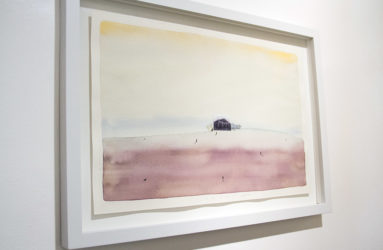 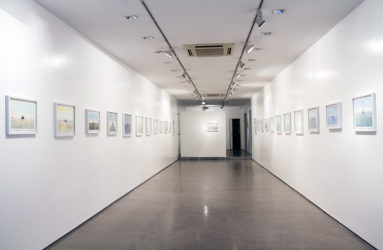 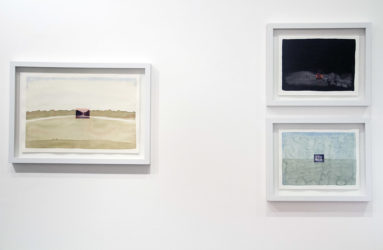 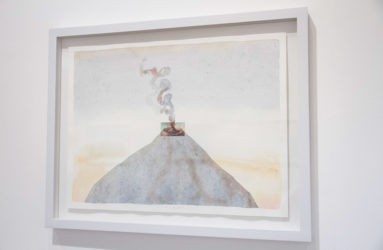 Two or three things I know about Fidel Sclavo

I would like to express some thoughts about Fidel Sclavo’s work and specifically about this series which we are exhibiting.

All these “Imaginary Landscapes” have a common element. At the center of each landscape there is an image, a collage of an old postcard, one of many that the artist has been collecting for years, reduced in size. Sclavo imagines what the “surroundings” could be of what is represented in the postcards. It is, of course, a poetical, whimsical game prompted by the postcard, by no means a literal or naturalistic model. The images function as a trigger employed by the artist to create fictions that take place in an imaginary setting, poetically plausible, in which those dreams , (or reveries, which is not the same thing) play a crucial role. They act as a prelude for the content of the work, set the tone, and impose its emotional temperature. Postcards, like photographs, are testimonials of another time and they conjugate in the past tense. In these works strong reminiscences of something that happened persist, something that happened to us -not in the literal sense, of course- and that appeals to us with the persuasive power of dreams. It is one of the most fascinating features of these art works. These images, in their poetic ambiguity integrate imagination and knowledge: what we see, is it only the result of a free fantasy in its oneiric indetermination, or do they constitute experiences -equally ambiguous- that we have had? Are we seeing or remembering? Dreaming is an individual experience: each dreamer dreams alone. Dreams can be narrated, not shared. But often art, representing them on a symbolic platform, transforms this individual experience into a shared one.

There is a whole cast of characters that show up frequently in Sclavo’s works: dark men, anonymous beings without identifiable features, who wander around the landscape. Also, here and there some dogs show up and often some mysterious ships in the distance. (What do they represent? What is their function?) Their undefined nature makes them open to interpretation.

Sclavo’s work is open, empathetic, prompts our approach, seduces us with its evident directness, takes us in. Its apparent simplicity surprises us. It is not at all naive (far from it!) and induces us into discovering what the artist himself discovered long ago. It is a consummated art and without a formal artifice (artifice here equals rhetoric). This work stands, fortunately, at odds with fashions and tendencies. It has been conceived by memory and fantasy. Yet, it is solid and as strong as a diamond. It allows the light to pass through and refracts it. Its seduction, like that of Douanier Rousseau, an unavoidable predecessor, is born from the amazement at the marvels of the world. Its reserve is also its strength. It doesn’t need to raise its voice to be heard. It is a work healthily stated in a soft tone. Sclavo’s austerity in the employment of his plastic devises has meant his work has been considered minimalist. But this is by no means a deliberate program on his part. If minimalism were only the transmission of an idea or a pictorial situation with a minimum of means, one could say that Sclavo’s work is in its’ own way minimalist. But its delicate humor and fine irony set it apart from all transcendent pretenses.

It is far from the emphatic solemnities of metaphysical painting, or the willful delusions of surrealism or the storminess of romantic or symbolist art. If we had to search for an affiliation, we would have to look towards some masters of the Renaissance, who Sclavo admires, with their arcadic, harmonious, bucolic visions: Giorgione, Piero di Cosimo, and the Carracci.

One characteristic of these works, which does not constitute a lesser virtue, although very difficult to summarize is: their charm. We perceive this quality so elusive in some human beings, and in the work of several artists: in Robert Louis Stevenson, in Borges, in Pergolesi, in Mozart, in Modigliani and in Figari, amongst many others.

A final observation: Sclavo employs watercolors; a light material, luminous and aqueous, appropriate for these works. Another: their size is modest, though their scale is not. Baudelaire called Goya’s lithographs “vast paintings in miniature”.