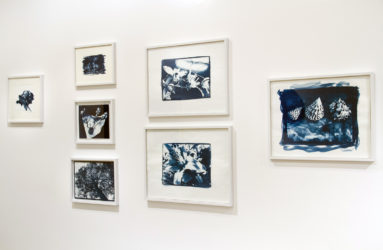 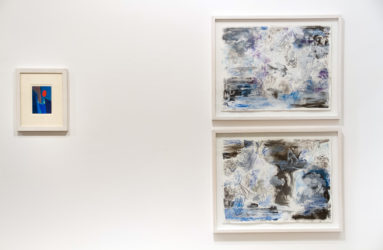 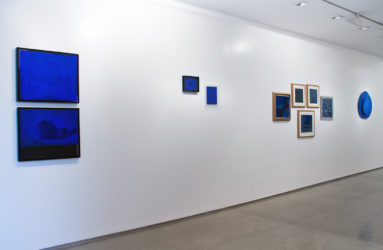 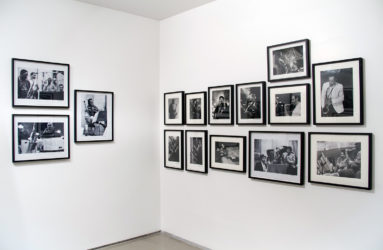 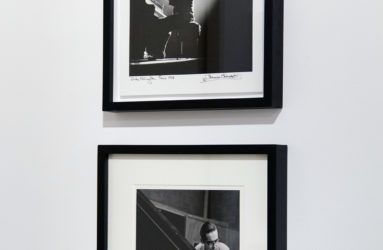 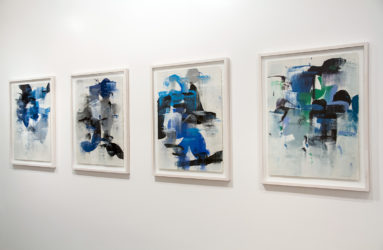 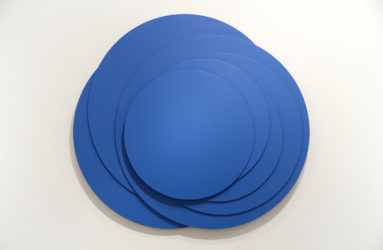 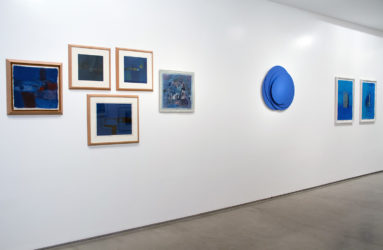 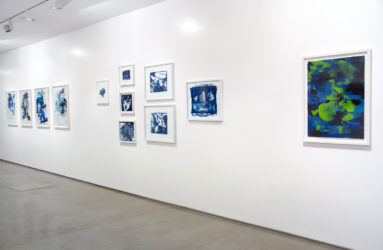 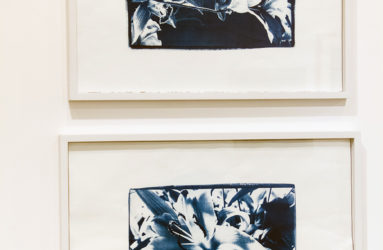 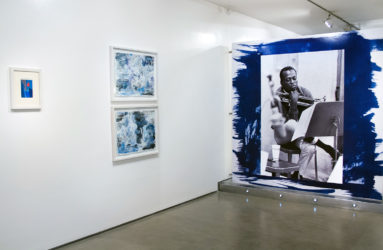 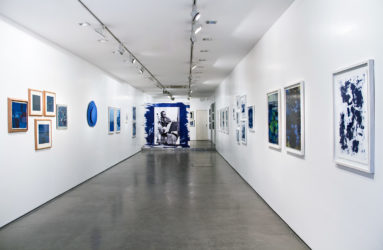 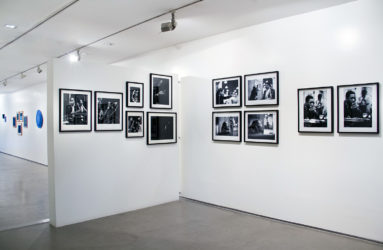 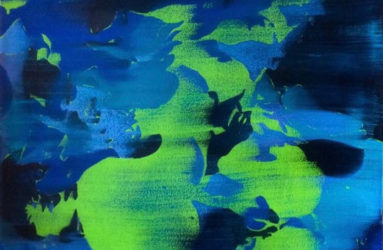 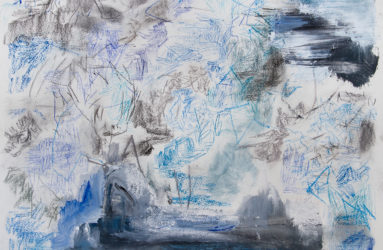 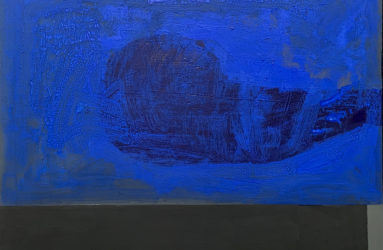 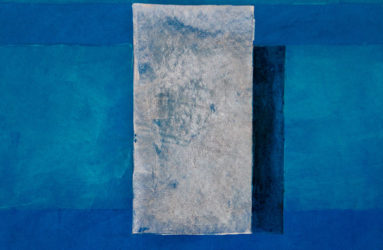 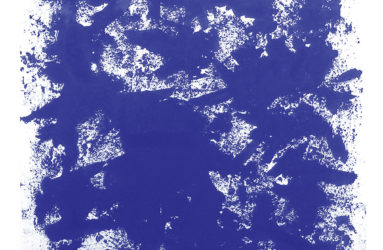 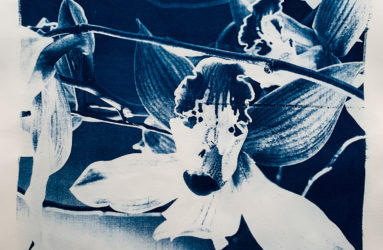 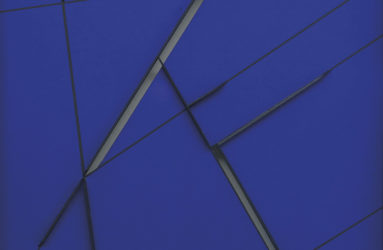 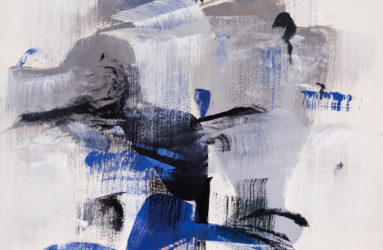 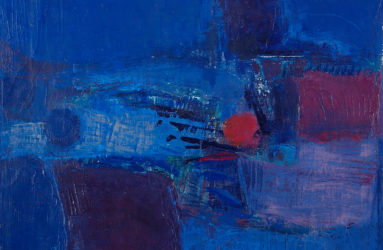 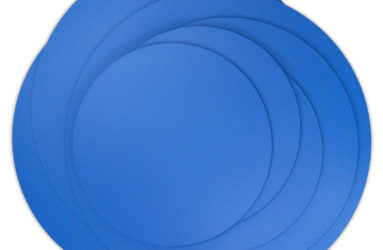 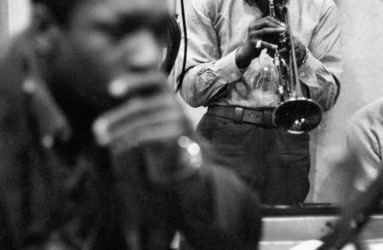 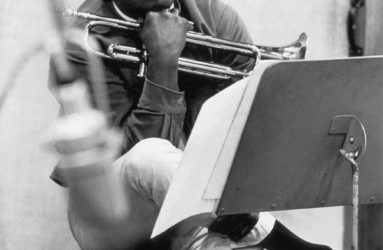 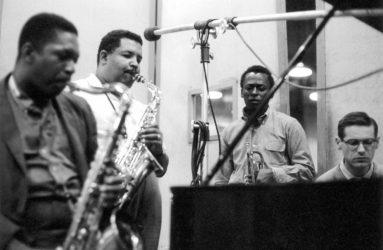 In memory of Menchi Sábat, a dear friend who was a great artist and passionate about jazz.

This exhibition aims to honor a record and celebrate a color. The album is called Kind of Blue (which could be translated as “a kind of sadness or a kind of melancholy”). The five songs that it is composed of were recorded in two sessions, in March and April 1959, in the studio of Columbia Records, an abandoned Greek orthodox church on 30th Street, in New York, by Miles Davis with a group of notable musicians, who he summoned to record this feat of musical excellence and superlative inspiration. Miles, an outstanding trumpeter and arranger, was the author of all the songs on the album, except for two in which he shared the authorship with Bill Evans. The formation was made up of: John Coltrane, tenor sax, Cannonball Adderley, alto saxophone, Bill Evans – great pianist -, Winton Kelly, another very good pianist, who only intervened in one of the grooves, Paul Chambers, bass and Jimmy Cobb, drums. It is known that shortly before starting to record, Miles who was sparing in character and not very expansive, distributed among his musicians some sheets with brief schematic notes on what they were going to play. Unlike the usual recordings in jazz, there were no rehearsals and almost no second take or re-recording. Davis, confident in the recognized improvisatory talent of his instrumentalists, encouraged freedom and spontaneity in execution from the start. The result was possibly the most famous and influential record in its genre, a revered masterpiece since its inception. Furthermore, it has been the best-selling album in jazz history.

Blue is one of those polysemic words that in English have more than one meaning. It can be noun or adjective and refer to a mood, as well as a color. Kind of Blue could also be interpreted (translated) as “a type of blue.” The blues is a musical composition born among African-Americans in the southern United States, which generally illustrates melancholic, mournful, evasive or protest moods, and reflects their harsh living conditions before (and after!) the abolition of slavery. The name derives from the expression “the blue devils”, metaphor of depression or sadness. The blues is a core composition in American popular music, and all jazz is marked by its imprint. Kind of Blue, from its title, identifies with the emotional and musical temperature that characterizes this music. According to Quincy Troupe, Miles’s biographer, he chose it alluding to the bittersweet experience of African-American culture, deliberately playing with the ambiguity of “blue,” the melancholy implicit in the term and musical composition.

The uniqueness of Miles Davis was also shown in the technical innovations of his compositions and in his interpretation. Kind of Blue represents one of the milestones of what is known as “jazz modal”, a term (said in a very succinct and simplified way) that defines a compositional and execution concept in which “the vertical gravity of harmony” prevails, (George Russell, musician and composer, explored the matter in detail). This model – among other peculiarities – favors the freedom of improvisation of the instrumentalist. Throughout his career, Miles explored new musical languages ​​and cultivated different styles of jazz, from bebop, hard-bop to cool; until completing his search in the 80s with his jazz-rock fusion albums. As a trumpet player Miles has an unmistakable and idiosyncratic sound. The execution is usually sober, economical, and subtle. Repeated pauses and silences contribute to the mystery and the spell. Davis knows, like few jazz musicians do, how to create an enigmatic and suggestive aura. Someone defined his music as “sophisticated simplicity.” The same could be said of the pianistic style of the wonderful Bill Evans, central figure of Kind of Blue. In the other extreme, and equally as essential, is the sax of John Coltrane, torrential, at times sublime, and always inspired. In this album, as in other Davis compositions, influences of classical music, traditional jazz and other cultures are interwoven, such as Flamenco Sketches, one of his most beautiful themes. The critic Ashley Kahn tells in detail the fascinating story of this capital album in his book Kind of Blue. The Making of the Miles Davis Masterpiece.

As part of the tribute to Kind of Blue we will exhibit the photos that Don Hunstein (1928 – 2017), who was for years the official photographer of Columbia Records, took during the recording. I was fortunate enough to meet him and spend a long time in his company during my first visit (in March 2011) to his apartment, near Lincoln Center, in New York. Don barely spoke, his face expressed great friendliness and affability, his gaze was sweet and vivacious but the fog of Alzheimer’s was already looming over him, which finally ended his life. But on that first visit he was still aware of his surroundings, he paid attention to my questions and he answered me with gestures of assent and eloquent smiles. I have a very vivid memory of our meeting. I asked him general questions about his best-known photographs, many of them reproduced in Columbia’s albums. In addition to having recorded the Kind of Blue sessions step by step, Don was the exclusive photographer for Glenn Gould, who only allowed himself to be photographed by him while recording. The famous photos of Bob Dylan, in 1963, underdressed and shivering, through the snowy streets of Greenwich Village, with his then-girlfriend, Suze Rotolo, are also his. He beautifully portrayed Simon and Garfunkel, Johnny Cash, Aretha Franklin, Billie Holiday (there are memorable shots, along with Coleman Hawkins), also Thelonious Monk, Brubeck, Gillespie, Mingus, Ellington and many other musicians who went through Columbia or who he photographed for friendship and admiration. On that first visit I was pointing out some of his photos that were hung on the walls. His face lit up when I mentioned those photographed by him but he quickly looked away, out of the visual field of the photo. I think I understood, or thought I understood, that Don was watching from somewhere else, from another time. A year later I visited the Hunsteins again but then Don, although present, no longer seemed to be there. My interlocutor at that time was his wife, DeeAnne, who I saw again after Don’s death. Fortunately, through DeeAnne I was able to acquire several photographs, which we will now exhibit, from this legendary photographer.

BLUE
It is probably the color of greatest diffusion and popularity in the West (in other cultures, in Japan, for example, that place is occupied by black). As historian Michel Pastoureau teaches us, in his fascinating books on color, this importance of blue is relatively “recent” in the history of mankind. In ancient times blue was not truly considered a color; only white, red and black had that status. The exception was Pharaonic Egypt, where blue was believed to bring good luck in the afterlife. Greek antiquity practically ignored blue (on the oldest known color scale, Aristotle does not include it and it was only interspersed in the Middle Ages, between green and black.) In ancient Rome it was disdained and identified with “Barbaric” cultures: for a woman to have blue eyes was a symbol of a bad life and for men a shameful physical trait. In the beginning of the Hebrew culture – Pastoureau tells us – in general, little attention was paid to colors and in the Old Testament they do not appear frequently. This attitude is radically reversed in the West, from the twelfth and thirteenth centuries, in which there is a change in the liturgy and in the artistic representation of the divine. The God of Christians represents the light, it becomes bluish and the sky – for the first time – is shown as blue; the emblematic color of the Virgin is blue and her mantle and clothes are that color. Since then, blue has become one of the colors with the highest metaphorical content in our culture.

In his influential “Theory of colors” (1810) Goethe attributes to these a symbolic significance and gives them a great influence on individuals. The book – which contests Newton’s theories on the subject – is both a scientific study and a treatise on the psychology of color. For Goethe, blue has a somber and melancholic connotation and he assigns it a paradoxical effect of distance and closeness, a contradictory sensation of excitement and rest. Several thinkers and scientists got excited about Goethe’s theories. One of the most important philosophers of the twentieth century, Ludwig Wittgenstein, published in 1951, towards the end of his life, a book on this subject: “Observations on colors.”

Much has been written about blue and from different angles. I have special admiration for an essay written by the American philosopher, novelist and literary critic William Gass who, in a rich prose, at times lewd, with a very baroque and overwhelmed rhetoric explores the trajectory – often ambiguous – of this color in the Anglo-Saxon language and culture and, occasionally, in French. Gass says at a certain point (who lists other colors) “(…) blue is therefore the most appropriate color for inner life. Whether it is light acute intense elusive sparing swift new and fresh or sweet deep dark suffocating soft slow smooth serious old and warm: blue moves easily through all of them, and all profoundly modify the states of our feelings. ” (William Gass, On being Blue. A Philosophical Inquiry, 1976).

In our exhibition we will present works on different supports from a group of artists who chose their own shade of blue to join this celebratory occasion.